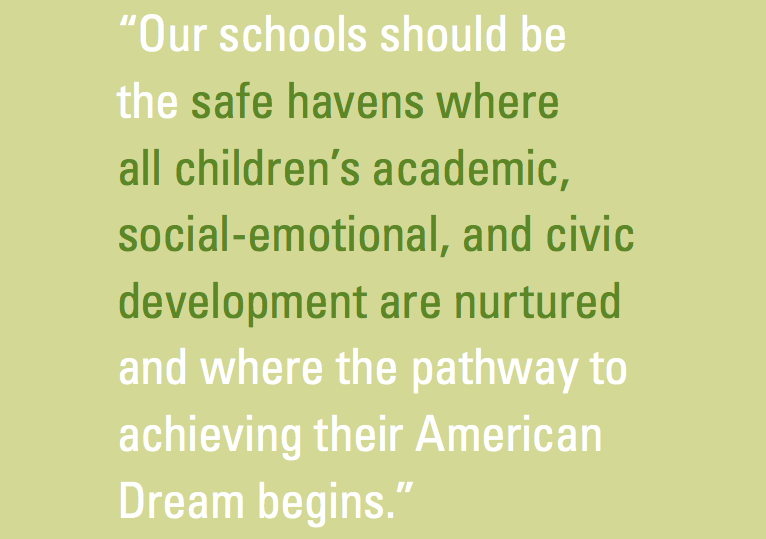 NEW YORK – As the families of more than 190,000 immigrant students across New York State wrestle with the current climate of fear and uncertainty, a new report finds major inconsistencies in how New York’s school districts are responding and the extent to which they are rising to the challenge of protecting and supporting the immigrant students and families they are charged to serve.

The report, Safe Havens: Protecting and Supporting New York State’s Immigrant Students – released by The Education Trust–New York, Advocates for Children of New York, the New York Immigration Coalition and The Committee for Hispanic Children and Families, Inc. – finds that while the New York State Education Department (SED) and the Attorney General’s Office, as well as several individual school districts, have taken a number of important steps, there is much more to do.

“Despite the leadership shown by state leaders and positive steps by a number of school districts, this research revealed significant inconsistencies and gaps at the local level that can create barriers for students rather than opening doors for their success,” said Ian Rosenblum, Executive Director of The Education Trust–New York. “All New York school districts should be a model for how states can protect and support immigrant students during these troubling times and beyond.”

Based on a review of documents from the 25 school districts that together enroll 80 percent of the state’s immigrant students, Safe Havens spotlights positive practices and troubling trends and highlights four critical areas where change is needed:

· Welcoming all students regardless of immigration status or national origin. Of the 25 school districts queried, at least eight districts shared communications or other documents that clearly demonstrated a commitment to establishing an inclusive school environment for immigrant students and families. For example, districts including Albany, Buffalo, Uniondale and New York City sent letters to families affirming their commitment to inclusiveness and diversity following the presidential election and anti-immigrant messaging from national leaders.

· Collection and handling of personal information. The student registration process is a critical point of contact that can instill security or fear in a newly arrived family. While none of the 25 districts requested a student’s Social Security card or number on the district registration form or explicitly asked for immigration status, there are other important areas that are likely to be mishandled. Most notably, 15 of the 25 school districts provided or post online forms that ask questions that can imply or indicate a student’s national origin during the enrollment process; many ask for inordinately burdensome proof of residency and/or proof of a child’s age; and three request documentation that would expose immigration status.

· Responding to federal immigration officials. The great fear of many immigrant families is that under the new administration, federal authorities will depart from the established norms and try to co-opt the educational system as an arm of immigration enforcement. New York City appears to have by far the clearest protocols for school staff to follow if a U.S. Immigration and Customs Enforcement or ICE agent seeks access to a school. Rochester also responded with instructions that were provided to school employees. However, no other school district provided such information on policies or protocols specific to ICE, beyond forwarding guidelines issued by SED and the Attorney General’s Office. This indicates a possible lack of preparedness at the local level that could easily result in confusion and unjustified entry if ICE ever seeks access to a school.

· Supporting students and families when a parent, family member, or guardian is at risk of deportation or has been deported. Few districts responded to the inquiry with materials indicating the availability of social-emotional supports and resources for students and families. While districts like Albany, New York City, Buffalo and White Plains provide guidance on where families can seek help and information through “Know Your Rights” events and similar programs, there is still much more that school districts can do.

Drawing on the experiences of immigrant community-based organizations, advocates and service providers, the report includes a set of recommendations for stronger supports at the state, school district and school levels. The report’s recommendations include that SED: assist school districts to provide greater support for immigrant students to ensure their long-term success; reiterate that questions about national origin should not be asked during the student registration process; encourage school districts to adopt – and in some cases, strengthen – their protocols for how to respond to any request for access by ICE; and reinforce the importance of providing social-emotional support.

“The recommendations in Safe Havens provide a clear roadmap for steps that New York State and district leaders should take to ensure that immigrant students and their families feel safe and supported by public schools,” said Kim Sweet, Executive Director of Advocates for Children of New York. “We appreciate New York State’s and New York City’s efforts to date and believe that the recommendations in the report will assist school districts across New York in meeting the ongoing concerns of immigrant families.”

“The Committee for Hispanic Children and Families commends the state and city for affirming their commitment to protecting undocumented and mixed status immigrant families,” said Diana Noriega, Chief Program Officer of the Committee for Hispanic Children and Families. “We believe that more can and should be done to support the holistic needs of this community who are so vital to the livelihood of the state and city. Implementing the Safe Havens recommendations will ensure that there is more consistency around best practices in school districts across New York State.”

CHCF was honored by the United States Census Bureau